For families choosing cremation, it’s important for you to know we offer only the highest level of care for your loved one. Cremation allows for more choices than many families realize. We offer the widest range of service options and product options in the area. In addition, our Cremation Safeguards ensure peace of mind, when you need it most. Call today to talk with one of our caring staff at (207) 773-6511 .

What is a Green Burial Service

A green burial service, or natural burial, is a funeral that does not use embalming fluids to preserve the body. Green services are designed to return bodies to the earth as naturally as possible without toxic chemicals. To accommodate this practice, there are many items to consider including caskets, liners, vaults, or grave liners to keep the casket protected from the surrounding soil. There are also options for urns if you would like to bury your loved one's ashes instead of their full body. Many green burials take place in woodland burial grounds where plots are kept open for eco-burials. If you live near a forested area and want your loved one buried deep within rather than in a cemetery plot, then you can ask that their urn be placed in a biodegradable box with their ashes. 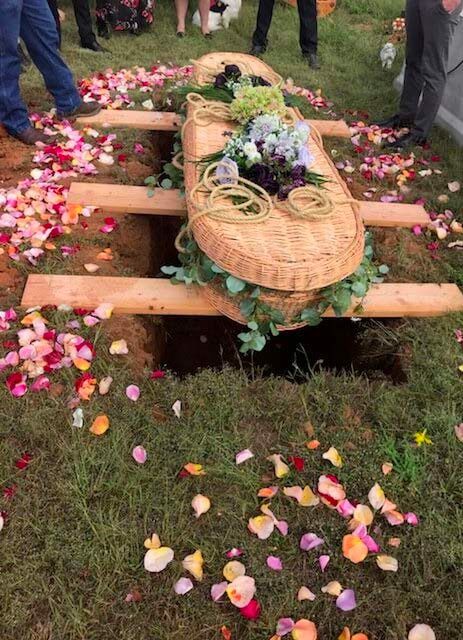 Green burial ideas are becoming more popular as people look for ways to reduce their environmental impact. There are many options for green burials, from using biodegradable materials to choosing a natural burial ground. Here are some examples of green burial ideas to consider:

If you want a green burial as your final send-off, you may be wondering which states allow such burials. More than half of all U.S. states permit green burials either by statute or by regulation. However, the laws do vary from state to state, and some require that those who choose it pay more money than what might be offered at a traditional funeral home and cemetery plot. You can find out about individual requirements by researching specific states. There is no specific Federal or State law that allows for green burials, but there are a few states that have laws or regulations on green burials.

As the funeral industry continues to grow, so do the options available to those who want to plan their final farewells. A green funeral is one of those options that are gaining in popularity as more Americans are turning away from traditional services.

According to Forbes, half of the American adults say they are less likely to have a religious service when they die, which means many are opting for alternative ways of saying goodbye. Most people know that green funerals include environmentally friendly treatments for corpses, but there are other factors involved too - including what happens after death has occurred. Green funerals typically involve embalming minimally if at all, using biodegradable materials and non-toxic methods whenever possible, avoiding harmful chemicals like formaldehyde, and recycling/reusing items that can't be composted.

Many people who prefer green funerals choose cremation over burial because it's more eco-friendly. According to Green Burial Council, cremations emit far less carbon dioxide than traditional burials, since the body doesn't have to be transported for burial or embalmed before being placed in a coffin. And ashes can often be buried onsite or scattered without digging up land - which is especially beneficial since only 4% of land in the US is suited for traditional burials (according to statistics from CBS News).

As Americans turn away from traditional funeral practices, they're beginning to consider how their choices may impact the environment after death. If you or your loved one want to communicate your dedication to conservation in your farewell, we have many options available to you when it comes to green funerals and burials.

A growing number of people are choosing green burial over traditional burial for a variety of reasons, including ethics, financial limitations, or environmental consciousness. If the idea appeals to you or your loved one, take this quiz along with our list of frequently asked questions about green burials.

Despite its name, a green burial is not only beneficial for the environment - it's also much friendlier on your wallet! With an initial Green Burial Council certified burial starting around $2,000 compared with an average cost of more than $10,000 for standard services in most parts of the United States (according to the National Funeral Directors Association), green burial becomes an increasingly attractive option when you consider the long-term cost.

Reasons for Choosing a Green Burial

At Conroy-Tully Walker, we believe your passion for caring for the environment should not just be how you live your daily life, but part of your eternal legacy.

If you or your loved one want to communicate your dedication to conservation in your farewell, we have many options available to you when it comes to green funerals and burials. We suggest families visit Green Burial Council and A Greener Funeral. Both of these websites are a wonderful resource for learning more about green burial. In a nutshell, the green burial choice is the simpler, more earth-friendly option.

We invite you to call our knowledgeable staff members to learn how we can help you plan a green Celebration of Life service.